Familiarize Yourself with Cao Dai, the Religion that Unites all Faiths; Discover its Origins at Tay Minh, Vietnam

Tay Minh is a town in Southwestern Vietnam, about 90 kilometers northwest of Ho Chi Minh City (Saigon).  What the town is perhaps best known for is the Tay Ninh Holy See, the founding temple of the Cao Dai religion.  It is a relatively new faith indigenous to Vietnam that encompasses teachings from various other major world religions.  It is interesting to go to Tay Minh and to experience the Cao Dai faith because of its infancy compared to other world religions (the the religion’s beginnings can be traced back to the 1920’s and the temple was built between 1933 and 1955) and its universal acceptance and incorporation of numerous world beliefs.  Anybody with a vested interest in religion should consider visiting the Tay Ninh Holy See.   A truly enlightening experience awaits!

The religion’s founder, Ngo Minh Chieu was a French civil servant who was also a mystic and was well versed in the philosophies and teachings of Western and Eastern religions.  He started receiving revelations from God (also known as Cao Dai) about starting a new faith that encompasses the teachings of Buddhism, Hinduism, Taoism, Confucianism, Christianity, Islam and other religions into one in order to promote peace.  He finally revealed what he has discovered from God to the public, which eventually caught on and became popular.

God is the center of everything in Cao Dai.  Even the construction of the Holy See was claimed to be a direct command from God.  The religion’s first disciples claim to have direct communication with God and gave them direct instructions in starting the Cao Dai religious movement.

Because of the influence of many of the world’s major religions, many important figures from these faiths are considered saints in Cao Dai.  These include the Buddha, Confucius, Jesus Christ, Muhammad, Pericles, Julius Caesar, Joan of Arc, Victor Hugo, and Sun Yat-sen, just to name a few.  Some estimates have about 3 million followers of the Cao Dai faith in Vietnam while others figure it at about 8 million.  Additional 30,000 or so followers (mainly of Vietnamese origin) are spread across the world, mainly in the United States, Europe and Australia.

So, what are some of the religion’s teachings?  Well, even before God, there existed Tao, the nameless, formless unchanging eternal force (a concept found in Taoism and Confucianism).  Then the Big Bang occurred, out of which God was born (a concept found in Emanationism, or the concept of cosmology in religion and that all things are derived from the First Reality or Perfect God).  In order to complete the creation of the universe, God created Ying and Yang (derived from Chinese philosophy and Taoism), in which he controlled Yang and a part of him which became a Goddess, looked over Ying.  There are 36 levels of heaven and 72 planets harboring intelligent life forms.  The first of those planets is closest to heaven while the 72nd planet is the closest to hell.  Earth is planet number 68.

The religion’s ethics are based on the reincarnation of the soul.  Caodaists are expected to pray once a day, lead an honest life, avoid violence to even the smallest animals, avoid adultery, avoid usage of foul language, be sober and follow a vegetarian diet.  Adhering to these rules, depending on the level of commitment, will either result in a favorable rebirth or an escape of the death/rebirth cycle altogether and be reborn in heaven.  Failure to do so can result in a rebirth in a much harsher planet than Earth.

The Cao Dai hierarchy is similar to the Roman Catholic Church, with the Pope, Bishops, Cardinals and Archbishops and Priests summing up the religion’s echelon.  Women are allowed to conduct Cao Dai services.  The religion’s main symbol is the Divine Eye, and in particular the left eye because God looks over Yang, which is on the left side of Ying/Yang.

A visit to Tay Minh and the Holy See is certainly an interesting and colorful experience.  Cao Dai worship involves group prayer in the temple as well as elaborate rituals and festivals.  Departing from Ho Chi Minh City, Exotissimo’s A Day Cao Dai Temple & Cu Chi Tunnels day trip takes you on a scenic drive through the countryside to the colorful and unique Holy See building.  The colorful and unusual murals that cover its interior will surely catch your attention, almost blinding you with their brilliance.  Visit www.exotravel.com for other interesting voyages to Southeast Asia and contact us if you would like to tweak or combine our Vietnam day trips, Vietnam tours or any other programs in our country day trips and tours listings. 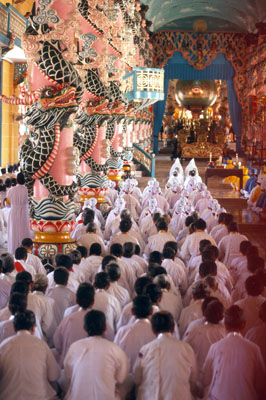