Experience the charming natural and cultural wonders of southern Myanmar. Begin with visits to multiple caves in Hpa An. Then, after visiting a charming colonial town, head to one of Myanmar’s most iconic pilgrimage sites, the Golden Rock. 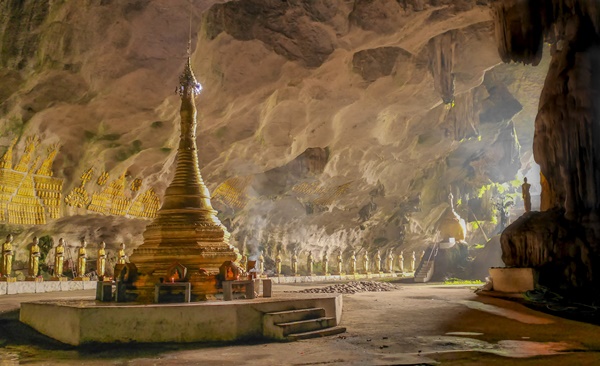 Visit a handful of miraculous caves decorated with Buddha images in Hpa An.

Rub shoulders with local pilgrims while ascending a mountain for a visit to the iconic Golden Rock.

Depart Yangon for a journey by road to Hpa An, the capital of Kayin state.

Along the way, we’ll visit Bayin Nyi cave. There is a beautiful monastery here set in front of a sheer rock wall and surrounded by a large natural spring. It’s not uncommon to see young monks going for a swim, still clothed in full monk attire.

We will arrive in Hpa An in the late afternoon.  As we approach the city, the mountains surrounding Hpa An will slowly come into view. There should be time to drop off your bags at the hotel before heading into town to visit Shwe Yin Myaw pagoda. This pagoda is the perfect spot to watch the sun set across the Thanlwin River.

Overnight in Hpa An

This morning the sightseeing starts at 08:00.

Our guide will meet you at our hotel after breakfast. Today’s first stop will be Sadan Cave. This cave will bring out our inner Indiana Jones. Sadan starts off as a typical Myanmar cave, full of Buddha images and even a reclining Buddha. As we make our way to the back of the cave, a natural tunnel comes into view. Follow the row of lights through the tunnel for about 15 minutes to get to the other side. As we reach the end, a magnificent view of a hidden lake and meadow come into sight.

As an optional activity, we can stop and have tea or coffee at the tea shop at the edge of the lake. From here, you’ll hire one of the local boat men to take us on a tour around the lake (client’s sit on the bamboo floor of the boat as there are no seats) and through another cave accessible only by boat the boat operates  from Oct to Apr, depending on water level).

After returning to our car, you’ll head toward Lumbini Gardens, where you’ll see thousands (1150 to be exact) of identical Buddha statues before going to Kyauk Ka Lat. This natural rock sculpture, surrounded by a manmade lake, offers spectacular views of Mt Zwekabin and the surrounding area.

The next stop on our tour will be Kawgun cave. Every conceivable inch of this cave is covered in Buddha images, many dating back to the 7th century. There is also an option to climb to the top of a large rock formation for great views.

Option: The last stop will be a sunset visit to Bat Cave. Living up to its name, Bat Cave is home to tens of thousands of bats and located along the bank of the Thanlwin River. As the sun dips in the background, the bats come out in droves and is quite a sight.

Just before dark, head back to our hotel.

Overnight in Hpa An

Today the tour starts at 08:00 after breakfast.

We’ll begin to take an hour drive to the city of Mawlamyine (Moulmein). Before it was established in Rangoon, Mawlamyine was the British capital of Burma. The British influence can be seen in the buildings, churches, and the beautiful Strand road along the river.

Along the way, we’ll stop at Kawdoe Kawnat village to visit Kawnat Monastery. This magnificent monastery with beautiful woodcarving was built a century ago by a villager named U Nar Ouat, who was famed in those days for his wealth and generosity. It was because of his donation that this religious site was built nearby his village.

From here, it is a short drive to Mawlamyine. We’ll start our tour at Kyaik Than Lan Pagoda, the city’s landmark. Built in 875 AD, it enshrines the Tripitaka Buddhist manuscripts as well as a hair relic from the Buddha. The 40 meter high stupa is located on a hill surrounded by 34 smaller Zediyan pagodas. From up here one can enjoy panoramic views over the city and harbor. It is also thought to be the site where Rudyard Kipling wrote his famous poem, Mandalay.

Next you will visit the ancient Queen Sein Don Monastery (locally known as Yada Bonmyint Monastery). This Monastery is more as 100 years old and is famous for its intricate woodcarving and Burmese crafts inside. It was founded by Queen Sein Tone who had to flee Mandalay at the time that Myanmar’s last monarch, King Thibaw Min, took power. She became home sick and asked the local carpenters to build a monastery in the replica style of her former palace.

Enjoy lunch at a local restaurant.

After lunch, we’ll visit some of the building remaining from Mawlamyine’s Colonial period. Included will be a stop at Holy Family Cathedral. Built during the colonial era, this church has a beautiful interior rarely seen by tourists. We’ll also stop at nearby Judson’s Church, built in 1827 by Dr. Judson who translated the Bible into Burmese.

Afterwards, we head to the jetty for a short boat ride to Shampoo Island, known in the Mon language as Ta Kaw Pon Za Lai.  The island sits at the confluence of five rivers meet and it was here where the Mon Kings used to hold ritualistic shampooing ceremonies during the local water festival, Thingyan. Spend 30-45 minutes on the island exploring the monastery, nunnery and pagoda.

Finally, return to Mawlamyine and have a chance to stroll down the beautiful Strand road as the sun sets along the river. Tonight, we’ll dine at one of the many restaurants along the river. The Burmese consider Mawlamyine the foodie capital of Myanmar. In fact there is an old Burmese saying “Mandalay is for eloquence, Mawlamyaing is for food, and Yangon is for boasting”.

This morning the journey continues at 08:00.

First,Afterwards,  we will head to the jetty for a short boat ride to Shampoo Island, known in the Mon language as Ta Kaw Pon Za Lai.  The island sits at the confluence of five rivers meet and it was here where the Mon Kings used to hold ritualistic shampooing ceremonies during the local water festival, Thingyan. Spend 30-45 minutes on the island exploring the monastery, nunnery and pagoda.

After that, Ddepart Mawlamyine and drive to Kyaikhtiyo, the Golden Rock. In theearly  afternoon, arrive at Kyaikhtiyo base camp (approximately 4 hrs). Travel by local, open-air truck along a winding road (45 minutes) where you will be dropped off a short 5 minutes walk from Golden Rock.

A huge boulder covered by gold leaf and delicately balanced on the edge of a cliff, Golden Rock is one of Myanmar's main pilgrimage sites.   The pagoda here is said to hold a hair of the Buddha and Buddhists from across the country come here to pay homage.

Today the tour starts at 08:00 after breakfast.

Return to the base camp by open-air truck and begin the return journey to Yangon. Along the way, stop in Htaukkyan township to visit the Allied War Cemetery. This beautifully-landscaped, peaceful area is the final resting place for more than 27,000 Allied Soldiers who perished during the World War II campaign in Myanmar.

Arrive back to Return to Yangon in the mid afternoon.