Discover the diversity of Manchuria in a compact, one-week train trip. Leave the skyscrapers of Beijing behind and venture out to the majestic Red Sea. Delve into ancient history in Shenyeng, be captivated by Harbin’s blend of cultures and explore coastal towns while looping through Manchuria by train. 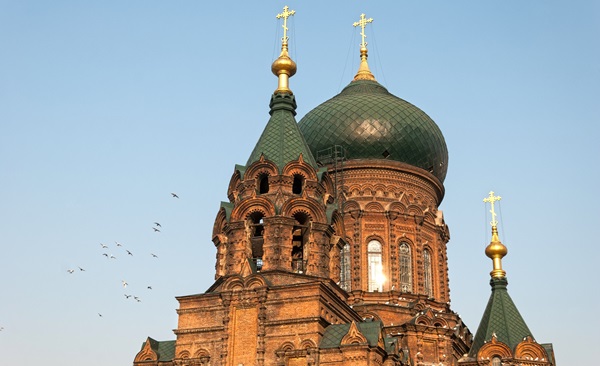 Get an in-depth look at Harbin

Visit a variety of ethnic communities, see colourful houses of worship and visit memorials commemorating the city’s tragic past.

Take a guided tour of Shenyeng’s Imperial Palace, exploring the fascinating buildings and learning about the powerful Manchu dynasty.

Begin this Manchuria tour with a guided transfer to Beijing’s train station. The train will be headed to Panjin (not accompanied by guide), arriving in the early afternoon.

Note: It is recommended to travel light on Chinese trains! Please also note that some train stations in China do not allow access to people without a ticket (this will apply to the guides for transfers from hotel to station to hotel).

Welcome to Panjin! This region is known as Liaoning (neighbouring North Korea), which is one of the three provinces that used to make up Manchuria (now known as “Dongbei”).

Transfer will be provided to the “Red Sea beach” alongside local guide and driver.

The Red Sea beach is a unique site that changes colour with the seasons. When out of season it’s green, in June it turns violet, and bright red between July and mid-September. These months are the best for photography, and also correspond to a noticeable increase in the number of visitors to the site.

Upon arrival, leave the transfer vehicle behind and hop aboard an electric car to the ‘beach’ (a distance of 9km). Sitting alongside the Shuang Taizi River, this region is mostly marshland covered in “suaeda heteroptera”, an herbaceous halophytic plant. A suspended wooden walkway has been installed above the marsh so that visitors can get closer to the plants without damaging them. It also provides access to a small temple dedicated to Mazu, goddess of the seas.

Continue in the electric car to the Reed Maze, with reeds reaching their maximum height between July and September. Enjoy a picturesque walk through the maze.

Note: Bags will stay in the car during the visit; they will stay here until the return to Panjin Station.

Return transfer to Panjin Station for the fast train to Shenyang (without a guide.)

Upon arrival, the guide and driver will be waiting to provide transport to the hotel.

Start Day 2 of the Manchuria tour with a guided transfer to the Imperial Palace. This structure was built during the reign of Nurhaci and acted as a symbolic centre of the Manchu power until 1644. While it’s quite small compared to the Forbidden City, its octagonal Hall of Political Affairs (reminiscent of Manchu tents) is well worth a visit. This crossover of tent to pavilion is a symbol of the settlement of the Manchu nomads.

From here, pay a visit to the Northern Tomb. Built in the 17th Century in the peaceful Beiling Park, it is home to the UNESCO-celebrated tombs of Abahai (Huang Taiji) and his wife. Take note of the Pine Forest surrounding the tomb, a unique observation of both precise historical planning and feng shui techniques.

After the tomb visits, transfer with the guide to Liaoning Provincial Museum, which exhibits, amongst other things, pieces from the age of the Liao Dynasty (907-1125.)

In the evening, sample a local type of fondue (meat and vegetables), a regional specialty that locals often eat during the area’s harsh winters.

Note: Shenyang is also known for its atypical “Strange Slope,” a place where the forces of gravity are inverted.  A 200m cycle path has been outlined where it is necessary to pedal to go down the hill and freewheel on the way back up! While scientists have put forward various theories on the causes of this surprising phenomenon, none have been proven. If interested in visiting, please consult us further… a unique addition to this Manchuria tour!

Begin the day with a transfer to Shenyang Station (with guide and driver) for the fast train to Harbin.

Arrival into Harbin around noon. Upon arrival, our guide and driver will be waiting for a welcome and transfer into the city. Bordering Russia, Harbin is part of the Heilongjiang province (literally “Black Dragon River”), known specifically for its extraordinary Ice Festival.

The Harbin tour will start with a poignant visit to the Japanese Biological Warfare Experimentation Centre, located in “Unit 731”, which served as a laboratory for the Japanese Imperial Army. It is here that biological weapons were developed through tests done on at least 3,000 humans from China, Russia, Korea, and Mongolia. A morose but important visit in Harbin.

Note: Warning – some of the images here can be shocking, and as such we do not recommend this visit for children under the age of 12.

Transfer to the hotel.

Spend the day on foot (transfer to the city center will be provided by car if the hotel is outside the neighborhood) to discover old Harbin, which is principally located in the Daoli Quarter. The walk will start in Stalin Park, set alongside the Songhua River, where several delightful cafes can be found.

Pay a visit to the Flood Control Monument, built in the 50’s to commemorate victims of a flash flooding of the River Songhua that claimed the lives of many locals.

Take a stroll down the famous Zhongyang Pedestrian Street (or “Central Street”). This street stretches out over 1.5km and houses some of the city’s clearest examples of Russian architectural heritage. Pass in front of the Modern Hotel (one of the accommodation choices). Built in 1906, some of the building’s original marble is partially conserved, along with some of its Art Nouveau touches.

Walk down Tongjiang Road, previously the heart of the Jewish community, and pay a visit to the Main Synagogue, which has today been converted into a cafe and some boutique shops. In the nearby area, pass by the neighboring Turkish Mosque (closed to visitors) which beautifully reflects the open spirit of the city. After just a few minutes’ walk, pay a visit to the early 20th century Harbin New Synagogue, which has been transformed into an interesting museum.

A final religious site is the Saint Sophia Church, a true symbol of Harbin. Built in 1907 by the Russians, this church is known as the biggest Orthodox Church in the Far East. Sitting in the middle of a vast square, the building’s interior has been re-imagined as the Harbin Architectural Arts Centre, which displays a collection showcasing the pluri-cultural architectural developments of the city through the years.

Note: Depending on the day’s pace, there may be a chance to visit Gogol Street (named after the Russian writer), located in the Nangang neighborhood (around 2.5km from the Saint Sophia Church). This road was built at the start of the twentieth century and is lined with trees and a beautiful collection of Russian buildings. It’s recommended to take a taxi to reach here.

Grab a bite to eat at Cafe Russia 1914, decorated in a typical Russian style. While the service isn’t always inspiring, the menu offers typical Russian specialties and the interior is covered in unique, antiquated photos, which make for an interesting visit.

Optionally: For night owls, we recommend the Harbin beer gardens, which are now an integral part of the zone’s atmosphere (on Zhongyang road and in Stalin Park).

Total distance of the walk: about 6km, but we also recommended a stroll down the roads running perpendicular to Zhongyang Road. The total distance varies depending on daytime add-ons (i.e. Gogol Street)

Begin the day with a guided transfer to Harbin Station for the train to Dalian.

Upon arrival, a guide and driver will be waiting for a welcome (back) and city transfer.

This trip returns to the Liaoning Province, more precisely the Liaodong Peninsula. Dalian remained a colony (Japanese, Russian) for nearly half a century and didn’t return to Chinese control until 1955 and the arrival of the Communists.

As the Russians were inspired by 19th Century French Urbanism, much of Dalian dons this architectural style. In particular, Zhongshan Square and the Dalian Hotel are some of the most notable places to visit. The number of western-style gardens, squares, and fountains in the city is further evidence of its colonial past.

The ecological politics of the previous mayor Bo Xilai (who later became mayor of Chongqing and was at the centre of one of the largest political scandals of recent times) also contributed to the proliferation of green spaces.

Pay a visit to the immense Xinghai Square and then take the coastal trail (4km) alongside the guide. Take note of the collection of traditional Junk Boats floating nearby, pass along the beaches of Jinsha and Yingsha, and ultimately finish the tour at Fujiazhuang Beach.

The driver will then provide transport to Tiger Beach, where the old fishing port has been renovated in the style of coastal American city. Enjoy a Seafood dinner.

Note: Dalian is known for its Beer Festival and International Fashion Festival. The former is held in July, and attracts brewers from around the world. The latter is usually held in September. Consult us for more information.

Begin the morning with a guided transfer to the neighboring city of Lushun. This little port town played an important role in military strategy throughout Chinese Imperial history up to it played host to the Russo-Japanese War. The city is today an open-air museum, home to sites linked to this tragic episode of the region’s history.

Start by visiting the Lushun Russo-Japanese Prison, built by the Russians in 1898 and expanded by the Japanese in 1907. The prison was a centre of torture and execution as well as a work camp for Korean and Chinese prisoners during the Russian and Japanese occupations.

Continue on to the Soviet Army Martyrs Cemetery. The largest cemetery for foreigners in China, buried here are Soviet soldiers killed during the liberation of the northeast of the country during the Second World War as well as pilots killed in combat during the Korean War (1959).

Next pay a visit to the Lushun Museum, offering a collection of bronzes, paintings and mummies in a beautiful early 20th century building.

Conclude the visit at 203 Hill, the strategic epicenter of the battle between the Japanese and Russian Empires. A memorial, in the form of the cartridge, has been erected on the site along with thousands of strew cartridges left in the area.

Wrapping up the tour, a transfer will be provided with guide and driver to Dalian North Station for the return train to Beijing.

A guide and driver will be waiting in Beijing to provide transport to the city hotel.

After breakfast, wrap up this Manchuria tour with transport (provided) to Beijing Airport for the departing flight.