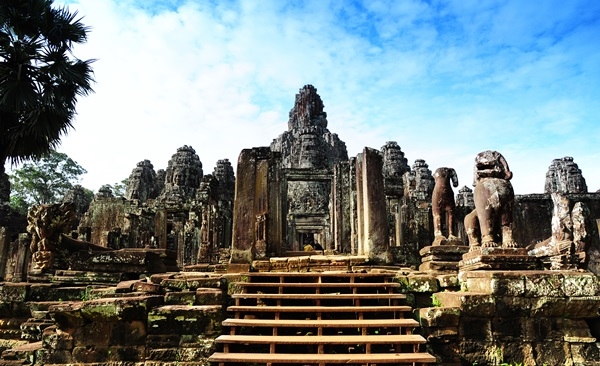 Delicious food in the jungle

Tuck-in to fine, catered food in the middle of the jungle.

Explore the best of Angkor with multiple forms of sports.

Watch the Phare Circus, known to be the Cirque du Soleil of Cambodia.

After arriving in Siem Reap airport and clearing customs, our guide and driver will be waiting outside with a signboard with your names on it.  They will help with your luggage and provide transport into the city to the hotel. Relax a bit before your evening adventure!

This evening you will enjoy taste of Cambodian Street food with Vespa Foodie Tour with your very own personal chauffeur. From the Pub Street comfort zone and after a refreshing Vespa ride, night has fallen and you will find yourself in the middle of the hustle and bustle of street vendors inviting you to taste a seemingly endless variety of unusual foods and fruits that offer a spectacular diversity of flavors and colors. Not all is for the fainthearted, but then of course you are not.

The next stop of the tour is at a typical local grill and drink stand where tasty snacks and drinks are served. When you look around you will see only local customers enjoying the great food that is freshly prepared right in front of your eyes.

Into the night you move to yet another part of Siem Reap town with numerous night spots that are frequented by local clientele. Our destination is a special restaurant that is hidden in plain sight between the bars and nightclubs. This restaurant boasts a local menu that stands out in quality and variety. A selection of their best specialties will be served, accompanied by drinks and local music performances.

Just when you think that this is the end of the tour you are again in for a refreshing after dinner ride on the way to the desert of the tour. Located in again another part of town you will enter a typical Cambodian style house to be introduced to the magic art of rice wine infusion with special herbs and spices. You will taste these tropical concoctions, which will be complemented by a selection of local sweets.

The presentation of a special souvenir marks the end of the tour and your driver will bring you safely to your hotel or, at your choice, drop you off in the city center of Siem Reap.

Cycle the Jungles of Angkor

Today is fantastic!  Set out directly from your hotel to explore Angkor Park via bicycle this morning, pedaling through dense jungles of the magnificent temples of Angkor.

Arrive the back way for a visit to Ta Prohm temple (a setting of one of the Tomb Raider films), built in the mid-12th to early 13th centuries in dedication to Jayavarman VII’s mother. Ta Prohm is unique in that it has been left largely as it was found: overgrown by jungle, trees and vines, with many parts of the temple crumbling to the ground. This makes Ta Prohm one of the most picturesque and memorable of the Angkor temples.

From Ta Prohm, dive back into the jungle and pedal through hidden passages to the ruins of Ta Nei (Grandfather Nei) and Preah Khan (dedicated to Jayavarman VII’s father) before heading to Angkor Thom. This was the last capital of the Great Khmer Empire under the reign of Jayavarman VII. An eight meter high wall draws a perfect square around the city ruin. Enter through the ancient East Gate. On each side of the entrance path a row of fifty-four gods and demons hold the sacred Naga snake of Hindu lore.

From the walls of Angkor Thom, head inward for Bayon Temple in the exact center of the city. This 12th century masterpiece is a study in grandeur and is well-known for its fifty-four towers with enigmatic faces representing the fifty-four provinces of the Great Khmer Empire. The Terrace of the Elephants and the Terrace of the Leper King are also must-visits as they are both known for their intricate bas-reliefs.

Southward now, through Angkor Thom to the famous Angkor Wat, the largest religious monument in the world. It was originally constructed as a Hindu temple of god Vishnu gradually transforming into a Buddhist temple toward the end of the 12th century.  Built during the reign of King Suryavarman II, Angkor Wat is constructed following the model of the temple mountain symbolizing Mount Meru, the home of the gods. Inside the temple, the walls are covered with stone carvings and bas-reliefs depicting Hindu mythology and the wars Suryavarman II fought during his reign. Angkor Wat is well known for the more than 2,000 Apsara dancers decorating the temple. Construction is thought to have taken around thirty years of intensive labor. Today, Angkor Wat is figured on Cambodia's national flag as the temple symbolizes the soul of the Khmer people.

One of the first Western visitors to the temple was António da Madalena, a Portuguese monk who visited in 1586 and said that it “is of such extraordinary construction that it is not possible to describe it with a pen, particularly since it is like no other building in the world. It has towers and decoration and all the refinements which the human genius can conceive of.”

Enjoy an evening of culture at Phare Cambodian Circus Show. Set up by refugees of the Khmer Rouge era, Phare promotes performing arts as a way to cope with trauma. Over the years they have not only helped hundreds of Cambodians but also helped to promote traditional Khmer culture.

Then sit down for dinner, a feast of traditional Cambodian dishes.

Afterwards the lights will dim and the performers will take to the stage. The hour-long show tells stories of modern life in Cambodia through a rich spectacle of song, dance and acrobatics. The performers combine traditional Khmer theatre with modern influences resulting in an entertaining and enthralling show.

Following the show there is an opportunity to take photos with the cast, a spectacular memory of the evening’s performance.

After breakfast, transfer the base of Kulen Mountain.  Kulen Mountain (Phnom Kulen) is an impressive sandstone plateau in this otherwise flat area. The mountain is considered the birthplace of the Khmer empire and a sacred place for the Khmer. At the top of Phnom Kulen, discover stone carvings in a riverbed, a large reclining Buddha from the 16th century, and several hidden pagodas.

After a nice climb you’ll arrive at a nice Pagoda overlooking the valley below.  This place is special for Khmers because of the fresh spring water rising up through the pagoda itself.  After a brief visit, continue trekking through a jungle path until you reach a very popular spot:  The Kulen Waterfalls.  Stop here and swim and have lunch along the riverside.

Next, continue your trek to reach The Big Buddha, which is a famous religious site where the budda is actually carved out the actual mountain top.  Not too far to go now until you reach the riverside campground nestled in the jungle.  Enjoy the rest of your afternoon exploring and enjoying the river.

This evening enjoy dinner by the riverside and see the magnificent stars.  Tonight we are at a nice riverfront campground and overnight in tents.

Wake up to fresh mountain air and enjoy breakfast before transferring back towards Siem Reap.

Start your day with a transfer to the shores of Tonle Sap Lake, where you will have the opportunity to learn about life on the lake. Tonlé Sap is South East Asia’s largest freshwater lake with its size varying greatly depending on the season, as it is swelling to about four times its size during the wet season.

Kayak across the Tonle Sap floodplain over paddy fields between trees and into the stilted village of Kampong Kleang, where the houses tower 8 meters above in the dry season but when the lake is full you can look onto the balconies. We paddle through the village finishing at Mrs Hong's house for a late lunch on her verandah overlooking the pagoda.

Available August to March.  Suitable for families with children.  Age 6+ in double kayaks with life jackets and support motorboat.  Note:  If the water level is too low, we will go to an alternate location that is equally enjoyable – No worries it will be super fun!

Afterwards and if time allows, pay a visit to the early temples of the Roluos Group. Roluos is the site of an ancient centre of Khmer civilization known as Hariharalaya. It was the first town built by the Angkorian kings in the 8th and 9th century and consists of three main temples: Bakong, Lolei and Preah Ko. The surrounding countryside with its rice paddy fields and sugar palm trees are very typically Cambodian.

Option 1:  Enjoy the morning at leisure before being picked up by your guide to transfer to the airport.  Don’t forget to do some souvenir shopping.

Option 2:  Get up extra early and take a packed breakfast from your hotel and go see sunrise at Angkor Wat.  It’s really special.  Afterwards, depending on your flight time, visit a few more temples before checking out of the hotel by 12PM.  Then transfer to the airport for your onward flight.

Alternately, please ask about extension trips to Phnom Penh, the islands off the coast, or another Multisport Adventure down in the Jungles and Mangrove forests of Koh Kong province along the coast

Our services don’t include: