With its youthful population, Cambodia is very much geared towards children. This emphasis is never more noticeable than around Siem Reap where the temples of Angkor offer plenty of grist for inquisitive young minds. The temple complex is ideal for exploring by bike. Away from the temples, youngsters can practice speaking Khmer in the marketplace and kayak on Tonle Sap lake. 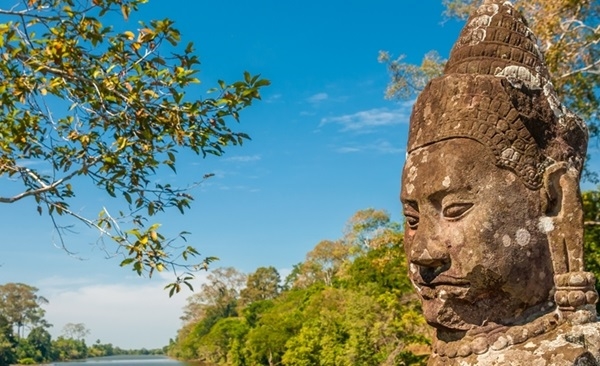 Discover the Angkor Temples by bike

Pedal along quiet forest tracks of Angkor Archaeological Park and gain a better appreciation for the wonderful ancient temples.

Get an up-close look at the Tonle Sap Lake with a kayaking adventure to a floating village.

Be enriched by Cambodian Culture

Arrive this afternoon at the Siem Reap International Airport where our English speaking guide and driver will be waiting to provide transport to the hotel. After check in, head out for dinner at Champey, a restaurant located in the downtown area of Siem Reap, otherwise known as Pshar Cha (Old Market).

After dinner, enjoy an evening show from Phare. Despite being known around town as the Cambodian circus, it is anything but a traditional big top. A nonprofit school for the arts, Phare is a demonstration of the graduate students’ acrobatic abilities. Exceptionally talented players act out everything from Cambodian folklore to the very real history of the Khmer Rouge; a must see for anyone visiting Siem Reap.

After breakfast, meet up with the guides and prepare for a journey through the jungles of Angkor.

The cycle begins with a visit to Ta Prohm, a temple built in the mid-12th to early 13th centuries. Ta Prohm is unique in the fact that it has been left largely as it was found: overgrown by jungle, trees, and vines, with many parts of the temple crumbling to the ground; by far one of the most picturesque and memorable of the Angkor temples.

Continue from Ta Prohm to the ancient city of Angkor Thom. This was the last capital of the Great Khmer Empire under the reign of Jayavarman VII. An eight meter high wall draws a perfect square around the city ruin. Enter through the ancient East Gate, which on each side boasts a row of fifty-four gods and demons hold the sacred Naga snake of Hindu lore.

Cycle through sandy paths winding through the jungle to Ta Keo, a massive pyramid temple that remains unfinished from the time of its construction. Only a few carvings were complete by the time of its abandonment over a thousand years ago.

Turn the bikes back toward town now and head for lunch at Marum a social enterprise dedicated to training underprivileged children in the restaurant and tourism industries.

After lunch, meet with the team from Say! Khmer for a lesson in the local language of Cambodia (Khmer). Begin with a short introductory lesson to some of the basic words and phrases. Afterward, travel by tuk-tuk to Phsar Leu to barter for today’s snacks; an experience quite common in Cambodia.

After visiting the market, head out to one of the less-visited temples in Angkor, Phnom Bok. About 25km from Siem Reap, this temple sits atop a 200m hill with a commanding view of the countryside and beautiful ruins to explore. At the top, it’s time for another short lesson while the shadows get a bit longer.

Descend the 600 steps from this small mountain and embark on a short tour of the countryside. The activities along the road vary from season to season: sometimes locals are harvesting rice, planting new crops, or simply playing in the fields while the sun begins to set. Return to Siem Reap after dark and stop off at the Night Market, where the locals come to shop and enjoy some leisure time with their families.

Dinner tonight will be served at Mahob, not far from the night market.

After enjoying a pleasant breakfast this morning, mount up and head to the ancient city of Angkor Thom. This was the last capital of the Great Khmer Empire under the reign of Jayavarman VII, of note for its eight meter high wall drawing a perfect square around the city. Enter through one of the main city gates, where stone faces look down with benevolent smiles.

At the city’s center lays Bayon Temple. This 12th century masterpiece is a study in grandeur and is well-known for its fifty-four towers covered in enigmatic faces representing the fifty-four provinces of the Great Khmer Empire. The Terrace of the Elephants and the Terrace of the Leper King are also must-visits as they are both known for their intricate bas reliefs.

Not far from Bayon lies the temple of Baphuon. This temple rises sharply from the ground and commands an excellent view over the surrounding landscape. The climb to the top may be a challenge for some, but it’s well worth the effort.

Return later to the famous Angkor Wat. Built during the reign of King Suryavarman II in the early 12th century, Angkor Wat was constructed to represent Mount Meru, the Hindu/Buddhist home of the gods. Inside the temple, the walls are covered with stone carvings and bas-reliefs depicting Hindu mythology and the wars Suryavarman II fought during his reign. Angkor Wat is also well known for its more than 2,000 Apsara dancers decorating the temple’s walls. Now sitting at the heart of the Cambodian flag, construction of this iconic temple is thought to have taken around 30 years to complete.

Enjoy lunch not far from the magnificent temple at the Angkor Café. Return to the hotel in the afternoon for some leisure time by the pool or try a horseback ride through the countryside (see below).

Head to the Happy Ranch outside of Siem Reap, a western style horse ranch. Get acquainted with purebred Cambodian horses, descendants of Mongolian wild horses, before enjoying a 2-hour countryside ride on horseback! The experience runs far outside the tourist area, trotting through rice fields and local villages to the rarely visited temple of Wat Atvea. Enjoy a walk through the peaceful temple ruins of Wat Atvea- a truly authentic experience. (Entrance fee is included.)

Note: Happy Ranch can arrange lead rides on gentle ponies for young children. Experienced staff will walk alongside and lead or just assist when necessary.

Cycle to the Roluos Group, around 20km from Angkor Wat. The Roluos Group is the site of an ancient center of Khmer civilization known as Hariharalaya; as such, the oldest temple complex of this area dates back to the 8th and 9th century. Explore the three main temples Bakong, Preah Ko and Lolei. Transfer back to Siem Reap this early evening to shower and then head out for dinner.

Take advantage of the cool morning and wake early to head out for the famous Tonle Sap. Tonle Sap is Southeast Asia’s largest freshwater lake, with a size that varies greatly depending on the season (swelling to about four times its size during the wet season.)

Explore this magnificent natural marvel by kayak. These two seat, inflatable kayaks are one of the best ways to see the lakes, as they can go where the noisy, long tailed boats cannot. Paddle through sunken fields and floating forests to the village of Kompong Khleang. Stop there for lunch at a stilted house or on one of the local boats, out on the lake (depending on the season). Then it’s back to shore where our tour ends.

Note: during the late dry season and early wet season (February – July) this tour changes destinations to the perennial lake near the base of Phnom Bok. While there are no stilted homes here the area provides a secluded retreat to paddle through.

Return to Siem Reap this afternoon and transfer to the airport for your onward flight.

Our services don’t include:

Back to Nature – Ulu Muda Escape

Glamping in the Mergui Islands