Discover a hidden corner of Japan with an insightful visit to historic Okayama. Wander through one of Japan’s Three Great Gardens and admire Okayama’s unusual black castle. Step back in time with a visit to neighbouring Kurashiki where charming Edo-era buildings and ancient shrines create an antique atmosphere. 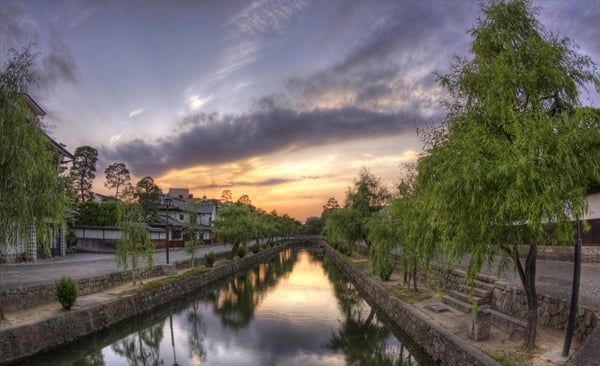 Cross the Asahi River for a walk through Korakuen, one of Japan’s Three Great Gardens, and enjoy the immaculate landscapes.

Wander through streets once used as a storage hub and admire the well-preserved depots that line Kurashiki’s canals.

Browse works from well-known artists such as Matisse and Picasso at the first, and oldest, Western art museum in Japan.

Depart the current city in Japan and head towards Okayama, the capital of Okayama Prefecture and the second largest city in Chugoku region next to Hiroshima.

The rest of the day is at leisure.

After leaving the luggage in the hotel, begin a self-guided tour of the city, starting with two of its most picturesque and well-visited places – Okayama Castle and Korakuen Garden.

Okayama Castle is also known as the “Crow Castle” for its black exterior. While it took eight years for the castle to be completed (1597), it was destroyed from fire during WWII. The structure that we see today only dates back to 1966, with its interior now serving as a museum. Like in other castles, the topmost floor offers views of the surrounding park and city.

Although the castle itself is relatively modern, there is still one remaining structure within the castle grounds that has existed since it was first constructed. The Tsukimi-yagura Tower was used to defend the castle but now serves as a venue for cultural events and for moon watching during the annual Mid-Autumn Festival.

Next stop is Korakuen Garden, hailed as one of the Three Great Gardens of Japan and a designated Special Place of Scenic Beauty. The only way to get to the garden from Okayama Castle is via Tsukimi-Bashi Bridge, a steel and concrete bridge that crosses over Asahi River.

This morning, the guide will provide a pick up from the hotel for the transfer to Kurashiki, the second most populated city in the prefecture.

During the Edo era, Kurashiki had served as the hub for storing rice and other local produce in the region, justifying its name which literally means “warehouse village.” Nowadays, Kurashiki is frequented by local and foreign tourists for its well-preserved old houses, depots and canals.

Begin with a stroll through Ebisu-dori Shopping Street filled with local restaurants, cafés, specialty shops, and even ateliers. The boutiques and studios vary from traditional Japanese paper to handmade ceramics. During the walk, pass by a small statue of Ebisu, the Shinto god of fishermen and good luck.

From the shopping center, make a quick detour to Achi Shrine, a 1700-year-old Shinto shrine that sits on top of Mt. Tsurugata (a short hike will be necessary). It is said that many years ago, this area used to be an island surrounded by the Seto Inland Sea which was believed to be guarded by the three goddesses of sea and voyage. Munakata Sanjojin, one of the goddesses, is enshrined here.

In spring, visit the nearby Tsurugatayama Park to see the “Great Wisteria of Achi,” a designated national treasure which is believed to be between three to five centuries old. Its pink flowers bloom around late May.

Descend from the shrine and continue walking towards the nostalgic Kurashiki Bikan and Canal Area, filled with traditional houses and shops with sliding doors and lattice windows. There are also a great number of white-plastered structures that used to be warehouses and a few traditional inns that add to the antique atmosphere of the area.

Visit the Ohara Museum of Art, the first and oldest Western art museum in Japan. On display are the works of some of the most well-known artists in the world such as El Greco, Matisse, and Picasso.

Alternatively, ride the kawabune, a traditional river boat, for a 30-minute cruise along the Kurashiki River.

Note: On-spot arrangement only. Limited to 6 pax per boat.

Finally, stop by Ivy Square, a commercial complex which used to be the site of the first modern cotton mill in the country. Nowadays, visitors flock the square to visit some of its museums, local shops, and art studios or stay in its hotel.

After breakfast, checkout from the hotel and continue on to the next destination.

Our Services Do Not Include: