Wat Phnom is one of the most important temples in Phnom Penh.  It was built in 1372 or 1422 (depending on the source) and sits atop a 27 meter hill (called phnom in Khmer) near the Tonle Sap River in the northeast section of the city.

The first legend regarding the founding of the temple centers on a wealthy widow known as Grandmother Penh.  She noticed a koki tree washed up on the banks of the Tonle Sap in 1372.  She intended to use the tree to build a house when she noticed four bronze Buddha images and one stone statue of Vishnu in its trunk.  After retrieving theses statues, she created sanctuary for them on a mound near her home.  The sanctuary eventually became Wat Phnom (translated into hill temple) and the hill itself known as Phnom Penh (literally meaning Penh’s hill).  There is a small shrine in between the stupa and the vihara (monastery) dedicated to Grandmother Penh.  She is a revered figure to many in the city, and the people consider her as a powerful protective spirit, watching over the temple and the town.  Many visit this spot and offer food and prayers.

The second account of the temple’s founding suggests that King Ponhea Yat built the temple after moving the capital from Angkor to Phnom Penh in 1422.  The stupa west of the sanctuary contains the king’s ashes.

There have been many additions to the original shrines over the centuries, once in 1434 several times during the 19th century and once again in 1926.  New statues and shrines were also added, while the sanctuary has been covered with new plaster and paint masking the wear and tear of over 600 years of existence.

The temple complex faces east and features a staircase guarded by nagas (serpent deities) and other mystical creatures.  The interior of the sanctuary consists of an altar and a large bronze Buddha statue.  The walls are decorated with paintings depicting the Jakata tales (stories of Buddha’s past births) as well as the Reamker, Cambodia’s version of the Ramayana (an ancient Sanskrit epic depicting the duties of people and their relationships).
There are numerous other activities visitors can engage in at the temple.

The hill’s slopes are a popular place where locals come and relax under the shade, socialize with their friends or family or sit idly by and relax in the soothing atmosphere.  There are also monkeys that provide entertainment for the people sitting there.  Visitors can also stop by for a photograph with the temple’s long-time resident Sam Bo, a 46 year old elephant who has been hanging around the temple since 1983.  The temple is also is the center of city celebration for the Cambodian New Year, and Pchum Benh (a Cambodian Buddhist holiday where people pay respects to deceased relatives).

Gain an overview of the capital city’s history and culture with Exotissimo’s Phnom Penh Sight Seeing Half Day – Phnom Penh tour.  Start at the Royal Palace and Silver Pagoda and continue to the National Museum to explore antiques and artifacts tied to the ancient past.  Finally, end the tour at Wat Phnom and enjoy panoramic views of the city.  Cambodia is a country with a vast array of activities and sites. While some people may come to view the most esteemed and ornate temples in Asia, others are more attracted to its beautiful beaches and clear warm waters.  Experience the wonders of the country with our 10-day Cambodia in Depth tour.  The tour has been designed to allow visitors to fully experience the best the country has to offer whether it be touring ancient temples, cycling along rural country roads, swimming around some of Asia’s finest waters, or trekking in the area’s lush forests and jungles.  You can also see our recommended Cambodia tours page for other interesting ideas into this wonderful country. 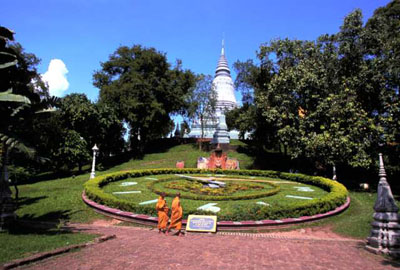