Expect the Unexpected: Experience the Weird, Unusual and even the Unexplainable in Laos

Laos may just be the last place on earth for the weird, unusual and the unexplainable. Or is it? Tucked within this laid back scenic land with Buddhist ideals are several sights that may just force you to scratch your head and ask the question “Is this normal or what?” Yes, Laos may in fact be home to the strange. If you want to vary your trip in Laos and add some unusual and peculiar moments to your laid back holiday, we suggest checking out these destinations.

Ever dreamed of an adventure in Wonderland? Well, Buddha Park comes close to that. Here is a world where four faced people, unconventional Buddha images, multi-headed snakes, demons, large vegetables and a whole lot more of unexplainable sculptures rein supreme. The highlight of Buddha Park is certainly the dragon/pumpkin statue combo. Enter its demon mouth (no worries, it is just a statue) and enter into a world of even more bizarreness. But it doesn’t end there. Climb up the stairs and enjoy a cool view of the entire park. Cue to pick up your camera.

Another distinguishing part of the park is the statues’ seemingly old look. It may resemble relics dating hundreds of years old, but it is in fact just over 50. The park is the brainchild of Bunleua Sulilat, a priest/shaman who integrated Hinduism and Buddhism, two interrelated religions, into one unique spectacle.

Where is this strange, strange land? It is not too far from Vientiane, located about 20 kilometers away from the capital and about 5 kilometers east of the Friendship Bridge.

Since we are in the topic of Buddhism, this moves us on over to the next destination nicely. Have you ever been to a cave where hundreds if not thousands of gold lacquered Buddha statues are practically eyeing your every move? Welcome to Pak Ou Caves.

Estimates have about 4000 Buddha images in these caverns, ranging in size from about the palm of a human hand to the length of an actual human being. They take many forms such as standing, meditation and reclining, just to name a few.

The legend, aura and mysticism of the place have existed well before the arrival of Buddhism into the country. During the time when animism was the de facto belief system, the cave was associated with the river spirit. When Buddhism eventually came, the caves’ animist origins continued on, but evolved to incorporate the current religion. So, people paid respect to the site by placing their old Buddha statues there. This has been going on for more than 600 years now!

Just 25 kilometers from Luang Prabang, Pak Ou Caves is frequented by many who visit the UNESCO city. It comes highly recommended as well. 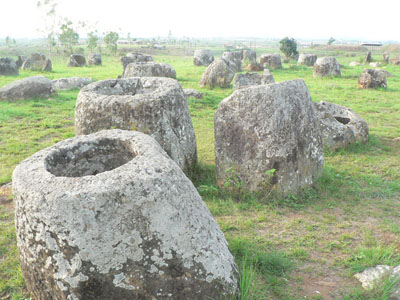 Sometimes, things are so weird and unusual that it just cannot be explained. In comes the Plain of Jars. As the name suggests, the plains here are filled with jars, some weighing in the tons. But mind you, these aren’t any ordinary household items. These are huge old pots, some of which have been dated to about 500 BCE! More than 90 sites are known within the province of Xieng Khouang. Each may contain anywhere between one or 400 stone jars.

Archeological experts have found similar sites in Northern India and Vietnam. The ones there are quite similar and known to be used for cremation purposes. So, perhaps there is a route between Laos, Vietnam and India? We will never know.

The locals, however, believe that the jars were used to store alcohol. According to legend, a race of giants has once populated the area and an ancient king fought a long and hard battle against them and won. In celebration, the king built these jars and brewed rice whisky in them.

Since the history and purpose of these jars are unknown, perhaps you can come up with your own theories as to their existence.

Check out our Laos tour page for more inspirations into the country.