Explore the Tree-Covered Angkor Ruins of Ta Phrom in Cambodia

Ta Prohm is an Angkorian temple built during the 12th and 13th centuries, one kilometer east of the main temples at Angkor Thom.  Unlike most of Cambodia’s temples in this area, Ta Phrom has been left in much the same condition in which it was founded, with jungles, branches and roots growing around and in some case, on the structures.  Ta Phrom is sometimes called by its original name of Rajavihara.

The state that Ta Phrom is in gives you a sense of what explorers in the late 19th century would’ve experienced when they came across it.  Rajavihara is one of the largest in Angkor with 260 statues representing gods and deities, 39 pinnacle towers and 566 residences.  The temple’s stele stated that the site was home to more than 12,500 people while approximately 80,000 villagers provided services to the temple and its residences.

The good news is that Rajavihara is mostly single leveled, so there are almost no stairways to climb.  There are however, a lot of thresholds to cross.  When you visit Ta Phrom, don’t be surprised by the feeling of déjà vu because you may have seen it in the Hollywood film Tomb Raider.

Ta Phrom was built during the reign of Jayavarman VII.  The late king built Rajavihara as homage to his family.  The temple’s main image representing Prajnaparamita (a deity symbolizing the personification of wisdom) is modeled after his mother.  The northern and southern satellite temples in the third enclosure were dedicated to the king’s guru and his elder brother.  Like most temples built during his reign, Ta Phrom was originally a Buddhist temple which was later converted to Hinduism by later kings.

The design of Ta Phrom is typical of a one-leveled Khmer temple.  Five rectangular enclosing walls surround the central sanctuary.  It is also orientated towards the east.  The laterite outer wall encloses an area of about 650,000 square meters.  At one time this was a substantial town but the area is now covered in forest.

Each of the cardinal points consists of gopuras (entrance buildings), although only the east and west entrances are accessible.  Later on in the 13th century, face towers were added to them.  Some of these faces have stood the test of time and are still intact.

Ta Phrom’s inner enclosures are galleried.  There are also libraries in the southeast corners of the first and third enclosures as well as satellite temples on the north and south ends of the third enclosure.  The Hall of Dancers, a rectangular building decorated with carved designs of dancing apsaras (celestial female nymphs) is situated between the eastern gopuras.  Because of these clues, it is hypothesized that nobles watched apsara dance performances in this building.  Another prominent building found only in temples constructed in the late 12th century is the House of Fire, also located by the eastern gopuras.  Sacred religious ceremonies involving the use of fire and flames theorized to have occurred in this building.

Ta Phrom presents a different temple touring experience if you are in Angkor.  The surrounding jungles and fig trees growing onto some of the structures will make you feel like an explorer who has just discovered a lost city.  Uncover these centuries’ old ruins with Exotissimo’s Siem Reap Sight Seeing Full Day – Siem Reap tour.  Your tour includes the magnificent Angkor Wat,the main monuments of Angkor Thom City such as Bayon and Terrace of the Elephants as well as the jungle covered Ta Phrom.  If you are looking for a detailed tour of the many temples and ruins in Angkor, then our Angkor Discovery tour is for you.  This program lets you witness the country’s unique cultural heritage in a leisurely and comfortable fashion, ensuring nothing of interest is missed.  In the space of four days, you will get to see Cambodia’s most spectacular historical sites whilst staying in the region’s finest hotels.  You can see our suggested Cambodia tours or Cambodia day trips pages for other interesting ideas into this wonderful country. 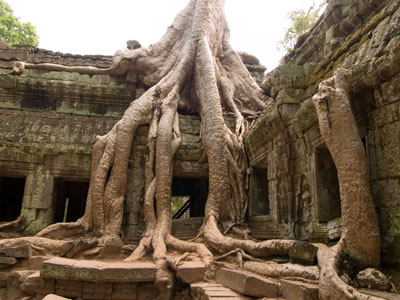