Shwedagon Pagoda is one of the holiest and most recognizable structures in Yangon.  The stupa is situated west of Kandawgyi Lake on the hills of Singuttara, towering over the Yangon skyline.

History of the shrine dates back more than 2,500 years.  The hill that Shwedagon Pagoda is on was considered sacred ground at the time.  According to legend, the king of Suvarnabhumi (the ‘golden land’ in Buddhist text, which according to Burmese theory covered present day Yangon) was meditating at Singuttara Hills and saw a vision of a newly enlightened Buddha.

After being enlightened under the Bodhi Tree, Buddha accepted some gifts from his disciples, brothers Tapussa and Bhallika from Okkala (present day Yangon) in Suvarnabhumi.  In gratitude, Buddha gave them eight strands of his own hair.

On their way back to the village, the brothers were robbed twice.  There were only four strands of hair left when the two finally reached Okkala and presented the gifts to its king.  Upon opening the container containing the hairs, the four missing strands magically re-appeared and all eight stands emitted a bright light that radiated throughout the world and brought miracles to the deaf, blind and others.  It is believed that these holy relics are enshrined within Shwedagon Pagoda.

The pagoda went through many stages of enhancements.  It fell into disrepair until the 14th century when the king of Bago had the stupa rebuilt and extended its height to 18 meters, from its original height of eight meters.  It was rebuilt several times until it reached its current height of 40 meters in the 15th century.  One earthquake in 1768 and another in 1970 required the hti (the umbrella shaped or spire on top of Burmese stupas) of the pagoda to be repaired.

The main stupa is plated with 8,688 golden tiles and the hti is decorated with more than 5,000 diamonds and 2,000 rubies and sapphires.   It is then topped with a large emerald meant to absorb the sun’s rays.  Surrounding the main pagoda are numerous other stupas, pavilions and halls.

There are four entrances that lead up a flight of steps to the platform on Singuttara Hill.  A pair of giant chinte (mythical lion-like creature) guards each entrance.  Opposite of each stairway are chapels dedicated to some of the past lives of the Buddha.  The base of the stupa is made of bricks covered in golden plates.  Northwest of the pagoda is a spot where people kneel down in front of the stupa and pray.

At the eastern edge of the area are eight planetary posts which represent the eight days of the week (Wednesday is divided into two sections because it is considered unlucky).  The day of the week a person is born determines which spot the devotee goes to.  Each spot is marked by specific animals that represents a certain day;  a garuda (mythical bird-like creature) for Sunday, a tiger for Monday, a lion for Tuesday, a tusked elephant for Wednesday morning, a tusk less elephant for Wednesday evening, a mouse for Thursday, a guinea pig for Friday and a naga (mythical serpent) for Saturday.  Each post has a Buddha image where devotees offer flowers and pour water over the statue as they pray.

The Assembly Hall is located near the northwestern corner of the terrace.  The temple’s highly respected abbots give lectures on Buddhist teachings there.  Behind the hall is a tall Buddha image.  There is a chord that is attached to a fan above the statue’s head that people pull to sway the fan back and forth, keeping ‘Buddha’ cool while one prays.

Shwedagon Pagoda is a unique site in Myanmar.  Unlike other religious sites, this one has both a spiritual and relaxed feel to it.  It is common to see teenagers gossiping and children running up and down the area while others are deep in prayer in front of a shrine.  Shwedagon Pagoda truly captures the informal, relaxed and religious nature of the Burmese people into one spot.  However, both foreign and local visitors must still wear proper clothing and remove their footwear when entering the pagoda.

Shwedagon Pagoda is a must-see for everybody visiting Yangon.  After touching down in Myanmar’s biggest city in our Highlights of Yangon & Surroundings tour, we will take you to the glittering stupa as well as the Kyaukhtatgyi Pagoda’s immense reclining Buddha.  This tour also immerses you into the culture and lifestyle of the people with visits to Bogyoke Market and the busy shops of Chinatown.

The Very Best of Myanmar tour is the complete Burmese experience, where you will visit Shwedagon Pagoda in Yangon as well as the country’s other important towns and sites.  You may see Exotissimo’s recommended Myanmar tours page for other memorable trips into this magical country or contact us if you have any questions. 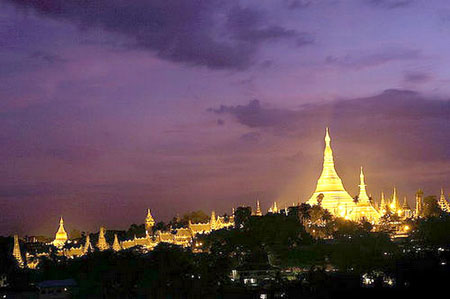