The frantic bustle of motorbikes meandering through traffic for the smallest of maneuvering space, the crumbled colonial building standing side by side with a traditional Vietnamese and modern skyscrapers, the tempting aroma of street vendor food; get used to the pace because Saigon is on the move. You can literally feel the vibe of the city the moment you step out of the airport. Saigom is alive, it likes to move fast and you are in for the ride! Whether you are inside Ho Chi Minh City (Saigon’s other name which is used 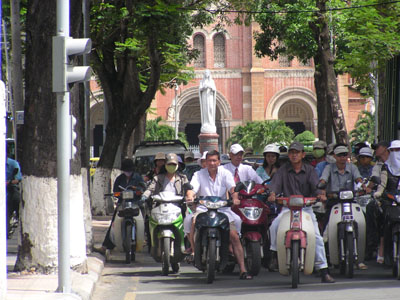 quite interchangeably) or just outside, you’re in for an experience to remember.

First, let’s take a look at Vietnam’s largest city. One of its aspects that strikes out the most is its seamless blend of East and West. Perhaps none sticks out more from the crowd than Notre Dame Cathedral, built in the late 1800’s. The Opera House, also built in the late 1800’s again perfectly demonstrates what French architecture is all about. Its shape is similar to the Paris Opera and the facade shares some resemblance with Petit Palais. In other words, this building is as French as fine wine. If you want to stay in hotel reminiscent of the era, perhaps the 1920’s built Saigon Majestic will suit your taste. If you like the colonial feel and ambiance, you have come to the right city.

Now let’s get to the Oriental aspects of Saigon, and there is not a better place to do so than at Chinatown, right? And since you are in Vietnam, you might as well take a look at some pagodas. Three stand out here in Ho Chi Minh City; they are Thien Hau, Quan Am and Phung Son Tu Pagodas.

Since we are in the history theme, let’s explore some of the city’s and country’s past. Many still associate Vietnam with the war in the 1960’s and 1970’s, and understandable so as many from that generation remember it vividly, which the War Remnants Museum does as well. Don’t forget the Reunification Palace, the site where that famous tank crashed through its gates on April 30, 1975, practically ending the war. And speaking of, the man most revered during it is Ho Chi Minh. Yes, the city is named after him and of course, there will be a museum in his honor. If you want to go back further in time and deviate yourself away from war, perhaps the ancient antiquities present in the Museum of Vietnamese History will kindle your interest.

Now to some true Vietnamese flavor, quite literally and figuratively. Ben Than Market in downtown Ho Chi Minh City sums up the Saigon atmosphere quite nicely, frantic yet with some sort of organization and a collection of various tastes, colors, sights and sounds. It is no wonder why the place is considered one of the city’s main symbols. You can find everything here ranging from handicrafts, textiles, ao dai (the traditional Vietnamese dress), conical straw hats, other souvenirs, as well as local cuisine.

And guess what, there are things to do and places to see just outside of Saigon as well. Perhaps the war museums have furthered your interest even more. There’s no place like actually going to the scene of the battles themselves. And the Cu Chi Tunnels will surely paint for you the grim picture of what life was like back then. This small and cramped underground network was where the Viet Cong guerrillas hid, lived and based a lot of their operations during the war.

We’ve already touched religion in Saigon, mainly of the Buddhist and colonial Christian variety. Now, let’s combine the two, along with all major world religions into one unifying belief system. And what do you get? Cao Dai. It is not a bad concept, if you think about it. And yes, pretty much all major religious figures are recognized and each given equal prominence. The temple, just 90 kilometers from Ho Chi Minh City is truly an interesting site.

This is Saigon and its surroundings in a nutshell. As you can see, the city is bustling with life and is doing so with variety and flair. Discover the city and live the frantic pace Saigon is known for with our Ho Chi Minh City Escape tour. Looking to experience more? Take a look at our Vietnam tours.