Pétanque: The Game for Anybody Played by just about Everybody in Laos

Pétanque is one of Laos’ favorite pastimes.  It is a form of boules (a collective name for games played with metal balls) where the object of the game is to throw the balls as close as possible to a small wooden ball or jack.  The game is usually played on hard surfaces such as dirt or gravel but in general, can be played just about anywhere, with the exception of concrete, asphalt or tiles which can break as a result of the balls being tossed on them.  The beauty of the game is that just about anybody, regardless of age, strength, height, or athletic ability can play.  If you are visiting Laos, don’t be surprised if locals ask you to join them for a game.  It is great fun and an excellent way to interact with the Lao people.

Q. How many people can play pétanque?

A. There are no limits in terms of how many participants can play in a game of pétanque.  Generally though, the game pits two teams against each other usually consisting of one, two, three or four players.  If teams of threes and fours are playing, usually two metal balls (sometimes called boules) are required for each player.  Otherwise, for teams of two or one, three or sometimes four boules are needed.

Q. So, what are the rules of the game?

A. The rules of pétanque are simple.  A coin toss (or any other method) decides which team goes first.  The team that starts the game will have one of its players draw a circle measuring about 50 centimeters in diameter.  This will be the spot in which every player will toss their boules from.  The first player then throws the small wooden ball or jack from the circle he/she just drew anywhere (preferably 6 meters or so away from the circle and about 50 centimeters away from any obstacles, like trees or lamp posts, etc).  That team then starts with the throwing of the first boule, followed by the second team.  Players are allowed to knock other balls away from the jack if they choose to do so.  After the first round, the team that threw their boule closest to the jack is the leading team.  The trailing team then steps up and tosses their balls until one of the balls is the closest to the jack (then the play switches to the other team) or until their boules run out.  The order of play continues like this until all boules have been tossed.   If any of the boules hits and obstacle, that boule is considered dead and is removed from the playing field.  The boules do not have to be tossed, they can be rolled or thrown at any height.

Q. How are points calculated?  How is a winner determined?

A. After all boules have been thrown, players determine which ball or balls are the closest to the jack.  The winner scores one point for each boule that is closer to the target than the opponent’s best boule.  A measuring tape can settle disputes between two closely positioned balls.   Points are added and a new leg will begin, with the winning team starting things off with the circle drawing and first boule toss.  The first team to 13 points wins the game (this can take as many legs as needed).

Pétanque is fun game that is suitable for the whole family.  Join in with the locals in a game with Exotissimo’s Luang Prabang: On the Kids Path tour.  This journey uncovers the wonders and culture of the Laos in a fun, hands-on way that is perfect for just about anyone.  The whole family will enjoy this enriching experience as you delve in to the traditions of Laos.  If you wish, we can arrange a game of pétanque with the locals for you.  You can also see our Laos tours page for other memorable tours into this relatively unexplored country and feel free to contact us if you have any question or would like to tweak or combine any of our tours. 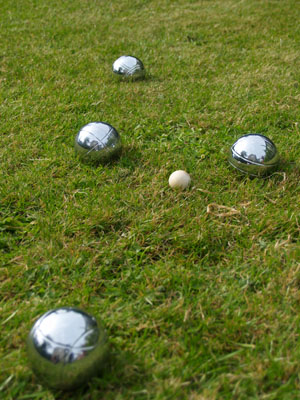