Mae Hong Son is a small town in Northern Thailand, near the Burmese border along the banks of the Pai River and capital of the province of the same name.  Surrounded by mountains and valleys, it is one of the most remote areas in the country.  The town is covered in mist practically year-round earning the nickname ‘the City of Three Mists’ due to the fact that fog and vapor covers the town during its cool, hot and rainy seasons.

Mae Hong Son presents a unique destination for visitors to Northern Thailand.  Its remote location ensures a truly authentic small town atmosphere.  It is also an excellent base for visitors looking to meet the area’s hilltribes, explore the town’s temples and trek the area’s pristine outdoor environment.

The Shan people represent the largest ethnic group in Mae Hong Son.  Apart from the Shan, many other hilltribe people migrate to the provincial capital to look for work.  The next largest ethnic groups are the Karen followed by the Lahu.  Other tribes include the Lisu, Mhong, and Lua.  Apart from the town, there are also various tribes who live in the remote mountain tops and hills where their lifestyles have changed little in the past centuries.

Due to its close proximity to Myanmar, many of Mae Hong Son’s architecture resemble Burmese designs.  This can be seen in some of the pagodas, Buddha statues and temple roofs which are designed in layers and decorated with engraved galvanized iron.

Phrathat Doi Gongmu Temple is a Shan temple located on the western side of town.  The temple is a good example of Burmese Mon architecture with its two cement chedis that stand out dramatically from the other surrounding structures.  It also offers magnificent views of the town and the surrounding countryside.

Phra Non Temple is located on the base of Gongmu Mountain and is inspired by Shan design and architecture.  Here visitors can visit a large Buddha statue as well as a museum displaying ancient tools.

Another Burmese style temple is Wat Hua Wieng.  The temple is designed in the Mandalay architectural style.  The temples houses Phra Chao Pharalakhaeng, a beautiful Buddha image that is dressed in elaborate attire which has been brought over from Mandalay in the 19th century.

In the center of town is Jong Kham Lake.  In the past, the lake served as the town’s major source of water.  The surrounding area was later renovated and decorated to serve as the town’s largest public park.  There are also two temples here; Jong Kham and Jong Klang.  Inside the temples are interesting collections of Burmese influenced art such as wooden dolls, glass paintings and chedis.

Thampla – Phasua Waterfall National Park is a nearby attraction worth visiting.  It covers an area approximately 488 square kilometers and is home to a wide range of flora and fauna.  Steep mountains dominate the topography of the park with the highest peak at Mount Doi Lan measuring 1,918 meters above sea level.  About 17 kilometers from Mae Hong Son and within the park’s jurisdiction is Thumpla, otherwise known as Fish Cave.  This is an excellent place to relax and escape the heat as well as seeing thousands of bluish black soro brook carp, which are drawn to the cave’s waters.  Another site worth visiting at the park is Pha Sua Waterfall.  During the rainy season, observers have mentioned that the running water looks like a mat, which earned the waterfall its name (pha sua means mat in Thai).

Despite its small town status and remote location, there is still so much to see and do in Mae Hong Son.  Stop by this rustic town on your tour of the North with Exotissimo’s Self Drive Package: Circle of the North program.  This package offers you an unmatched opportunity to explore Northern Thailand’s remarkable natural landscape and distinctive cultures at your own pace.  We provide car rental, hotel bookings, a detailed road map and a book of suggested excursions to ensure a hassle-free vacation.  If you prefer to explore the region on two feet, then our Old Elephant Trail Trek is the package for you.  This week-long trek takes you through hills, mountains and dense jungles along the Thai-Burmese border with breathtaking views of natural scenery and visits to ancient hill tribe villages.  You can also see our Thailand tours page for other interesting trips into this amazing country. 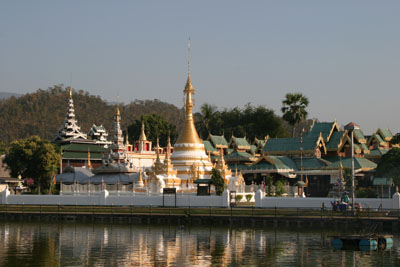