Have you noticed the similarities between Hinduism and Buddhism? Buddhism may not be a religion with a central god or god-like figures (although it does not deny its existence). It has, however incorporated many belief systems into its faith, quite evident today in many parts of the world. Southeast Asia is no exception. In fact, the two are so interrelated that some folk may mistake one for the other. One common element between the two are its mythologies and legends. Without further ado, let’s take a look at some of them.

Buddha may deny the existence of gods, but he hasn’t ruled them out entirely. He believed in the existence of other worlds, mainly heaven and hell (which is also prevalent in Hinduism), and that these gods are merely angels populating the celestial worlds. In fact, in early Buddhist scriptures, he himself have ascended the heavens and met them himself. 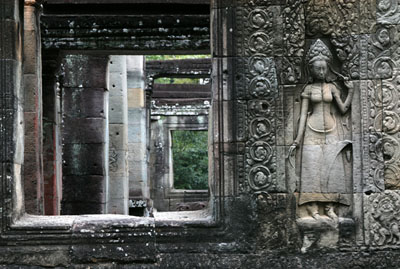 Whether in Buddhist Southeast Asia examining once-Hindu temples and structures or in India, you just can’t miss out on these beautiful nymphs. They are in Angkor, they are in paintings, they are even performances named after them. In fact, these water based celestial beings are renowned for their beautiful and seductive dances, both in mythology and in real life. Apsara dancing is quite an art form in Cambodia. Watch those fingers and toes curl up gracefully and be mesmerized by the overall grace and beauty of the performances.

This is an important concept in not only Buddhist and Hindu cosmology, but also in the Jain religion. The mountain is said to 1,082,000 kilometers high, or 85 times the Earth’s diameter. In Buddhism, however, it is called Sumeru and is much smaller (ranging between 5-12 kilometers long), but its purpose is the same. Angkor Wat was designed with the concept of Mount Meru in mind as well as Prambanan temple in Java, Indonesia. According to legend, just about nothing is greater than Mount Meru because it is the center of all the physical, metaphysical and spiritual universes.

What goes around comes around. That is pretty much the concept of karma and it is a prevalent subject in both Buddhism and Hinduism. So, whatever we do (or don’t do), whatever our thoughts are, there are consequences to those. All this keeps us bound to the cycle of birth, death and rebirth.

That’s right, one of the best known deities is prevalent in both religions, more so in Hinduism though, but still respected in both. The elephant head makes him easily recognizable no matter what faith you may hold. In Buddhism, Ganesha means different things to different types of Buddhism and countries, but in Thai Theravada Buddhism, he is seen as the lord of business and diplomacy. So, don’t be surprised to see fruits by his side when business is good or his picture or statue upside down when business is down. There is a shrine dedicated to the deity in front of Bangkok’s Central World mall and one in Doi Suthep temple, Chiang Mai, where people offer flowers, incense.

Say hello or ssssss to another very popular deity in both Hinduism and Buddhism. Could it be because of its snake-like appearance? Some may have just one head like the common reptile, but others have multiple. Some even have beaks. So, where can you see them? Just about everywhere, so watch out! Most temple stair handles are nagas. Some are seen hovering over Buddha himself. Others guard temple entrances. And here’s a twist for you, some even believe that they exist here in this world. Legend has it that one exists at the juncture where Nam Khan river meets the Mekong River in Luang Prabang, prompting the construction of Wat Xieng Thong.

This is one of the most important Hindu epics; an integral part of the religion’s canon. It depicts the duties of relationships, portraying ideal characters like the ideal father, ideal servant, the ideal brother, the ideal wife and the ideal king. Different countries in Southeast Asia depict the epic uniquely. You can see these at temples in Thailand, Laos, Cambodia, Myanmar and Indonesia. The most prominent places are on stone bas reliefs at Banteay Srei in Cambodia and on wall paintings at the Grand Palace in Bangkok. In Buddhism, its origin as a Hindu epic has been lost somewhat, and instead is part of the Jakata Tales; the overall story arc of Buddha’s past life.

Come to Southeast Asia, and be fascinated! The religions and cultures here produce some of the most interesting and intriguing myths and legends out there. Now you know that many of Buddhism’s mythologies are also Hindu’s. And it makes sense. After all, Buddha himself was born into a Hindu family and society.

Let the region allure you with its charm and mysticism as you embark on your Southeast Asian Discovery tour. Words cannot do justice in describing the region. And see for yourself the similarities and differences between these two world religions and each country’s depictions of these myths. If that is not enough, then browse through our multi-country tours.