Experience Bangkok inside & outside of the Sprawling City; the way the City should be experienced

The City of Angels, the City that Never Sleeps and the city with the longest name (we’ll show you the name soon enough); welcome to Bangkok. The big sprawling mega capital has all the characteristics one would find in a huge metro, but anybody, even locals are in for a surprise or two. You see, there are still sites and experiences that have remained and kept its cool under the city’s rapid spread of modernism. Plus, there are local sites and sounds to be had just outside of its metro borders. So, let’s get to know Bangkok and its neighbors a little bit.

First, let’s get to know the Bangkok everyone knows about. Perhaps you just haven’t been here before and need to get acquainted with the city a little bit. No problem. The public transportation is growing as we speak and features vehicles of all sorts, from two, three (who can forget those iconic tuk-tuks?), four wheels and more, to the underground, through water and even in the skies. You can and will get to the city’s main sites by these mean of transportation. View a video here: http://bit.ly/oabfao

Ahh, the smell of fresh grilled chicken, the aroma of stir fried rice, the steam from cooked rice, the sound of ingredients being pounded in a mortar and pestle. What is Bangkok without those tempting tastes? Take a tour of the city and discover some of the essentials for that tempting Thai taste, from the market, vendors and of course the famous pad thai at Tipsamai Pad Thai Restaurant. View a video here: http://bit.ly/n8OuHB.

What is a Bangkok experience without visiting its most iconic temples? But this is more than just that. You’ll get to witness the early 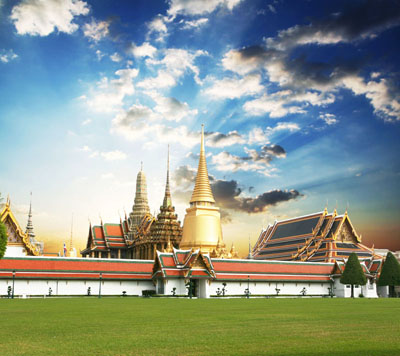 morning monk chant at Wat Pho (Bangkok’s oldest temple), a rarely experienced event. From here, you’ll get to witness the impressive golden Reclining Buddha before continuing to the Grand Palace, the official residence of the Royal Family. Be awed by the grandeur of the place, from its glittering structures, throne halls and the revered Emerald Buddha.

Bangkok was once referred as the Venice of the East. As the city modernized, the maze of canals (known as klongs locally) gave way to a maze of concrete roads. However, the city still maintains its canal rich roots and for one reason or another, remains some of the less-explored areas of the city. Hop on a longtail boat and meander through the waterways of Northern Bangkok, away from the towering skyscrapers and into an unknown village-like world.

Let’s go to the source of the klongs at the Chao Phraya River. The River of Kings practically divides the city in half into the skyscraper haven of the east and the almost rural half on the opposite Thonburi side, giving Bangkok an almost Dr. Jekyll and Mr. Hyde sort of identity. You’ll get to experience the best of both worlds via the iconic longtail boat, exploring hidden and less-visited temples on the quieter side of Bangkok.

This is as close you can get to being with the Royal Family’s private collection of art and other treasures. The historic Ananta Samakhorn Throne Hall, built in 1907 is where it is at, and only recently has it been opened to the public. The renaissance style architecture, gold and domes of the building are just as impressive as the gems inside.

The good thing about Bangkok is its central location. Just a short transfer north is a city filled with history. Ayutthaya was once Thailand’s capital, and its proud status is evident for all to see through its many grand ruins, temples and pagodas. The best way to get here is by train, passing through prime rural scenes and integrating yourself with the local people and overall Thai countryside feel.

The next ‘near Bangkok’ destination is the Floating Market. We will take you to the lesser visited one, guaranteeing that you will experience the authentic sights and sounds of a typical floating market. You will meander through the maze of canals and wiggle your way through other boats, all while absorbing the lively atmosphere as well as shopping for Thai goods and eats along the way.

These are just the tip of the iceberg of what you can do in and around the Thai capital. If you have time to spare in the city, why not get the most out of it and pursue one of our Bangkok daytrips? They also make for great extensions to our Thailand tours, giving you an extra edge in the capital over most other visitors.  Oh, and here it is, Bangkok’s official name: Krung Thep Mahanakhon Amon Rattanakosin Mahintharayutthaya Mahadilok Phop Noppharat Ratchathani Burirom Udomratchaniwet Mahasathan Amon Phiman Awatan Sathit Sakkathattiya Witsanukam Prasit.