The Emerald Buddha, informally known in Thai as Phra Kaeo Morakot or by its official name of Phra Phuttha Maha Mani Rattana Patimakon is a 45 centimeter tall figurine made of jade (rather than emerald) that rests in the Temple of the Emerald Buddha in the Grand Palace complex.  The figurine is one of the country’s most revered objects and is held in high regard throughout the region.

According to legend, the Emerald Buddha was carved in what is today Panta, India in 43 BC by Nagasema (a very prominent Buddhist sage).  After staying in Panta for approximately 300 years, it was brought over to Sri Lanka where it was used to stop the country’s civil war.  Then, in 457 AD, King Anurath of Burma asked Sri Lankan officials for Buddhist scriptures and the Emerald Buddha so he can promote Buddhism in his country.  The requests were granted and the statue arrived in Myanmar without incident.  However, on the return trip, the ship containing the statue lost its way during a storm and ended up in Cambodia.  When Siam captured Angkor Wat in the 15th century, the statue stayed in Thailand and ended up in Chiang Rai, where the ruler hid it.

According to historians, the statue was discovered in a chedi in Chiang Rai in 1434 AD.  Lightning struck the stupa, which revealed something underneath the stucco.  It was dug out and the image was called the Emerald Buddha because it was at first thought to have been made of emerald.

King Sam Fang of Lannathai wanted to have the statue at his capital in Chiang Mai.  However, the elephant carrying the image refused to go there.  Instead, it went to Lampang, which was perceived as a divine sign.  The statue stayed there until 1468 when it was finally moved to Chiang Mai and kept at Wat Chedi Luang.

The King of Chiang Mai, who had no male heirs, passed away.  He did, however, bore a daughter who was married to the King of Laos.  He accepted the throne to Chiang Mai, but reverted back to Laos after his father passed away.  He also took the statue back to Luang Prabang with him, where it remained for 12 years.  When the country’s capital moved to Vientiane, so did the statue where it remained until 1779.

In 1779, Thai General Chao Phraya Chakri (who would later become King Rama 1, founder of Thailand’s current monarch) captured Vientiane and took the statue back to Thonburi with him.  To protect it from invaders, Thailand moved the capital across the river into what is present day Bangkok.  The statue found its new home in Wat Phra Kaew on March 22nd 1784, where it has remained since.

The Emerald Buddha is always seen adorned in gold garments.  There are three sets of clothing for the statue, which represents the changing of the seasons in Thailand.  The King of Thailand changes clothing in March (for the beginning of the hot season), July (for the start of the rainy season) and once more in November (to correspond with the cool season).  The two remaining gold clothes not in use can be seen at Pavilion of Regalia, Royal Decorations and Thai Coins at the grounds of the Grand Palace.

Learning about the Emerald Buddha will certainly give you insight into the colorful history of the region.  See this great statue along with other attractions with Exotissimo’s Bangkok and Central Thailand tour.  In addition, you will also discover the cultural, historical and natural richness of Central Thailand while you stay in elegant accommodations in an alluring and relaxing vacation.  If you would like to explore Thailand’s capital even further, you may find our Bangkok City Safari day trip tour perfect for you.  This tour allows you to take advantage of Bangkok’s local transportation as you travel around the city and visit its attractions.  You can also see our Thailand tours page or Thailand day trips page for other memorable tours in one of Asia’s most dynamic countries. 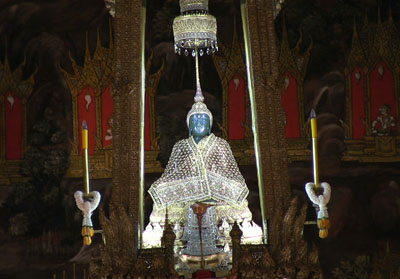