Chiang Mai is Thailand’s fifth largest city, located about 700 kilometers north of Bangkok.  It is the largest and one of the region’s most culturally significant cities.  Chiang Mai has over 300 temples some of which are over 700 years old.

The temples in and around Chiang Mai exhibit a variety of architectural styles that reflect the varied heritage of Northern Thailand.  Elements from Lanna, Thai, Burmese, Sri Lankan and Mon designs have all been used in one form or another.  Delicate wood carvings and golden Naga (serpent deities) staircases add a touch of class and flamboyance to the already beautiful layout of temples.  In addition, gilded umbrellas, glittering guardian statues as well as pagodas decorated with gold filigree combine to heighten the overall effect when you are exploring the temples.

With so many temples to visit, which are the ones to see?  The first and foremost stop has to be Wat Doi Suthep.   The temple is located on Doi Suthep Mountain 1073 meters from the ground (the mountain itself is 1676 meters above ground).  It is Chiang Mai’s holiest temple and is noted for its large chedi where Buddha’s shoulder bone is believed to be inside.

Another important temple in Chinag Mai is Wat Phra Singh.  The temple houses an important Buddha statue, the Phra Singh Buddha which gives the temple its name.  Another highlight of the temple is its monastery featuring Lanna-style temple murals and intricate gold patterns on red lacquer.

Wat Chiang Mun is the oldest Royal temple in Chiang Mai.  It was founded on the same day Chiang Mai was founded in 1296.  The temple is noted for its two Buddha images, the stone stele Phra Sila and the quartz crystal image of Phra Sae Tang Khamani which according to legend are 1800 and 2500 years old respectively.  Phra Sila is revered to have rain giving powers while Phra Sae Tang Khamani is thought to protect against disasters because of its survival during Lamphun’s invasion by King Mangrai and his forces.

Wat Chedi Luang is another temple worth visiting in Chiang Mai.  It used to have a massive pagoda which was devastated during an earthquake in 1545.  At the time, the temple housed the Emerald Buddha, but the disaster forced the sacred statue to be moved to Luang Prabang.  After the earthquake, the chedi laid in ruins until the early 1990’s when it was finally reconstructed.

Wat Umong is one of the city’s most interesting temples.  It is built on the foothill of Doi Suthep Mountain and is heavily forested.  What makes this temple stand apart from the rest is its tunnels which give this temple its name (umong is the Thai word for tunnel).  The tunnels were built because at the time of construction in the 14th century, the monk residing there was deemed to be crazy and unable to practice Buddha’s teaching in the city.  In response, the king built the temple in an isolated area and with tunnels for the monk to meditate away from others.

Visit some of the city’s most popular temples with Exotissimo’s Chiang Mai City Temples and Walking Tour – Chiang Mai day trip program.  The day will familiarize you with the city as you visit the Mae Ping River bank and Warorot market as well as Wat Chedi Luang and Wat Phra Singh.  Chiang Mai is also an excellent place to have a quality family holiday.  Our Chiang Mai Family Adventure offers you and your loved ones a varied program which includes a visit to Wat Doi Suthep as well as cycling trips to hilltribe villages, an elephant ride through the jungle and our Flight of the Gibbons, a fun zip-line adventure over tree tops.  You may also contact us if you have any questions about our tours, temples or if you would like to tweak any of our programs. 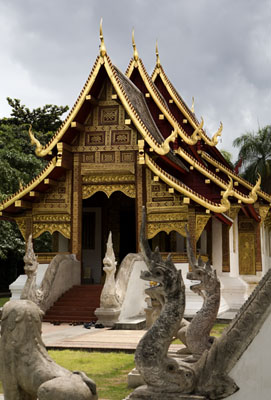