Borobudur is Southeast Asia’s largest Buddhist monument.  The Mahayana Buddhist temple consists of six levels topped by an additional three circular platforms and is decorated with 2,672 relief panels and 504 Buddha statues.  The topmost platform consists of the monument’s dome, which is surrounded by 72 Buddha statues.  The temple is a major Buddhist pilgrimage site and is one of the country’s most visited attractions.

The temple is located near Magelang, Central Java Indonesia, about 40 kilometers northwest of Jogjakarta.  Besides Borodudur, there are other Buddhist and Hindu temples in the area, such as Pawon, Mendut and the Prambanan temples compound.  What differentiates Borobudur from the other temples in the region is that it is built on a bedrock hill, about 260 meters above sea level while the other temples were built on a flat surface.

The is no concrete history as to who built the temple and for what purpose, but historians believe that construction was finished sometime in the 9th century and that it may have taken over 70 years to complete.  It may have started out as a Hindu temple but was converted into a Buddhist monument right before construction.

The base of the temple is square in shape, perhaps to symbolize earth’s impurity.  As one goes up, the ‘stiffness’ of the square gives way to circular rings, symbolizing the transaction into the heavens.  The paths also contain miniature stupas containing Buddhas inside.  The way up the temple circumnavigates around the center, allowing visitors to observe over a kilometer of reliefs depicting events in Buddha’s life.  The path also ascends through three levels of Buddhist cosmology, namely Kamadhatu (the world of desire), Rupadhatu (the world of forms) and Arupadhatu (the world of formless meditation), with a system of stairways and corridors containing more than 1,400 relief panels.

The reason for Borobudur’s abandonment remains unclear.  Two possibly interlinked events may explain its desertion.  Between 928 and 1006 AD, there was a shift in power from Central Java to East Java and a series of volcano eruptions took place during that time.  It is not entirely known if the natural disasters led to the shift in power, but this is the general consensus of Borobudur’s disbandment.  Another popular belief for the temple’s abandonment is the island’s conversion to Islam in the 15th century.

The Buddhist monument was found under layers of volcanic ash and jungle vegetation by a joint British and Dutch expedition in 1814.  Due to the fragile nature of the temple, Borobudur could not be completely unearthed at the time, having to wait until 1835 for the whole structure to be fully revealed.  There were initial fears that Borobudur had to be disassembled completely and the reliefs placed in museums because of the monument’s unstable condition.  But after a thorough investigation of the structure, it was revealed that these fears were unjustified and that it should be left intact.

After the UNESCO-funded restoration work in 1973, Borobudur was once again a place of worship and a Buddhist pilgrimage site.  The ceremony for Visakha Bucha (sometimes known as Vesak), a day commemorating Buddha’s birth, enlightenment and passing away is celebrated at the three Buddhist temples by walking from Mendut to Pawon and ending at Borobudur.

Borobudur is certainly one of the must visit temples in all of Southeast Asia.  It is massive and is perhaps the oldest temple in Southeast Asia.  Arrive early to reach Borobudur for sunrise, before the crowds turn up and enjoy a guided tour of the monument with Exotissimo’s Highlights of Jogjakarta and Surroundings tour.  This 3-day highlight of Java’s smallest province is not too intense, offering a balance between time spent at your own leisure and following our itinerary.  See our Indonesia tours page for other memorable programs into this fascinating country or contact us for any questions or if you would like to tweak any of our tours. 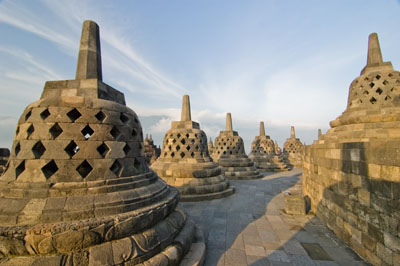