Spice up your Stay in Bangkok with an Authentic Thai Cooking Course! Then, eat your Masterpieces!

Tom Yummmm Goong (well, one m is enough).  We all know of this hearty, orange prawn filled soup.  It sure is tasty, and it is even zestier after I learned the true secrets behind the soup at the Blue Elephant.

Walking into the colonial building the Blue Elephant was in was like walking into a time machine…back to Thailand in 1857.  It took coconut and shallot welcome drink to finally wake me up back into the 21st century.  Wow!  That was some drink!  Who needs Red Bull?

I was introduced to the other students and ‘victims’ of the welcome drink when our chef walked in and greeted everyone with the customary wai.  She owns an impressive resume, winning awards on several cooking competitions, worked in highly acclaimed luxury hotels around the world and served dignitaries and other notable individuals throughout her career.

Before I knew it, we were zipping above the busy Bangkok streets on the Skytrain and on our way to the Bang Rak morning market.  The scenes here are amazing!  At one corner you have dunes of hot chilies in various colors while at the other end fresh poultry is on display with blood dripping onto the floor.  At another corner, live crabs bounded by plastic strings are on show and ready to pounce and attack anyone who walks near it while a flower section ‘sweetens’ the market scene up a bit.  And yes, the aroma of each section conjures up for a truly unforgettable scent!  A true experience for the senses!

After picking up our ingredients, we then zipped back to the school and freshened up with a more customary drink of milk tea, but in a plastic bag and straw.  Drink as the Thais do, as I say.

The first dish I prepared is that orange prawn soup I mentioned earlier.  With the chef’s guidance, I was able to create a truly culinary masterpiece with the taste to back it up.  Yes, it is authentic…including the spiciness.  I wanted just one chili in the soup, but the chef insisted I add three, while also mentioning that normal Thai tongues can usually handle four or more!  Eat as the Thais do, as I say.

As I was making this orange soup, I was also preparing another soup, this one green in color and called Kaeng Keaw Waan Kai (Green Curry with Chicken).  As with the Tom Yum Goong dish, the curry paste was created by smashing spices and the chilies I picked up from the dune in the market together in a mortar with a pestle.  It was good fun.

As I was preparing the soups, I got down to making fish cakes, Thai style.  These too were supplemented with more chilies than I am used to.  But the resulting taste is heavenly (not quite the synonym I’d use for something spicy, but it did taste that good).

Finally, I got down to making another renowned Thai dish, Pad Thai.  I decided to scatter tofu into this, since I already have a shrimp, fish and chicken dish waiting to be devoured.  The end result?  A pad Thai that is much lighter and less oily than what I am used to, which means healthier eating!  Eating all the dishes for lunch was spicy, to say the least, but also heavenly, for lack of a better word.

To fully enjoy your travels, I recommend that you try the local food.  After all, to get a taste for the country one must try its flavors.  But why not learn how to make the dish then?  For the best and most authentic Thai culinary experience, I recommend taking Exotissimo’s Culinary Delights of Bangkok day trip.  You will go to the market, pick out your ingredients, cook your meals and finally gorge on them, just like I did.  This tour can be easily combined while you are in Bangkok in one of the Thailand tours.  Just click on contact us and Exotissimo will make sure to include it for you.  Happy eating! 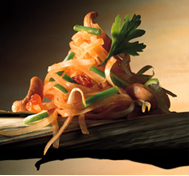