The Exotic, the Amazing, the Unique; it’s all Waiting for you in Sumatra

Looking for nature? You’ve come to the right place. And that place is Sumatra, Indonesia. The island (the world’s 6th largest and Indonesia’s biggest) is quite wild and rugged. The fact that it is an island also gives it the benefit of harboring some of the world’s unique wildlife (Mr. Sumatran Orangutan, we’re looking at you). Also included are jungles (some of which are protected by UNESCO and declared a Heritage Site), volcanoes and lakes. So, if you’re looking for some adventure and yearning to experience the exotic then come on down to Sumatra and satisfy your travel desires.

For many, the island conjures up images of our orange distant cousins. They mainly live in the northern parts of the island and perhaps the best place to see them is at Bukit Lawang in the Gunung Leuser National Park. Let’s take a closer look at these animals, shall we?

These guys are a little smaller than their Borneo cousins, growing to about 1.4 meters tall and weighing no more than 90 kilograms. This particular type of great ape is endemic to this part of the island only. The species, quite sadly is also critically endangered; only about 7000 are left in the wild. Keep an eye out and watch their eating habits; it is quite amazing to see them using tools to dig out honey and termites as well as using it to pry seeds out of fruits. 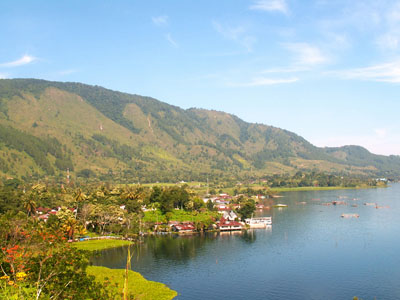 This is another big reason why people come to Sumatra. As mentioned earlier, volcanoes are abundant here. And that means there will be more than enough crater lakes to satisfy even the most avid of naturalists. And Lake Toba isn’t any regular volcanic lake; it is the world’s biggest. And not only that, there is an island within the lake too (called Samosir Island), itself a highly coveted travel destination.

Just being here amid all the history leaves much to the imagination. The area was formed from an eruption some 70,000 years ago, an event that left a lasting legacy on Earth’s climate and on the genetic inheritance of all humans today (according to some studies, most of the world’s population at the time did not live past the event and only small pockets of survivors in Central East Africa and India remained). To say you are part of history by being here is quite an understatement; much of the world as we know today can be traced right here at Lake Toba.

Before heading off to these great Sumatran attractions, a stop at the island’s biggest and country’s fourth largest city is a must. Travel around the city by becak (otherwise known as trishaws) is highly recommended. Why? Because they are abundant. It is either that or by car. Grasp some of the city’s, history by visiting the Sultan’s Deli Palace built in 1888. In former times the Palace was considered as the center of the town administrative before Medan developed. The city is also diverse, evident by the various religious buildings available to visit, such as Vihara Borobudur (Buddhist temple), Vihara Gurung TImur (Chinese temple), Mesjid Raya Mosque and Shri Mariamman (Hindu temple).

Suring is quite possible at this island. In fact, the Mentawai Islands off Sumatra’s west coast can boast some of the world’s best waves. They are so good that only seasoned surfers should attempt to ride the waters. The fact that coral reefs are also quite shallow have added to the area’s reputation. Pulau Nias is another popular surfing destination, this one a little more accessible to the novice wave rider. While waiting for the waves, keep an eye out for sea turtles.

Lots, lots more are waiting for you at Sumatra. Yes, this is a haven for the outdoors, and yes a truly memorable time awaits. Exotissimo’s Best of Sumatra brings to you the best of the island, whether it is its flora, fauna, culture and scenery.

Did you know that Indonesia is made up of over 17,000 islands? And that they come and go as we speak (thanks to the area’s tectonic plates)? It may be impossible to send you to all of them, but we got the best ones covered in our Indonesia tours.